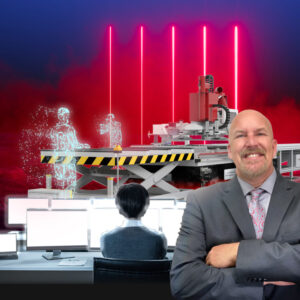 If you went to the last AWFS Fair in Vegas, you’ll probably remember the CNC Factory booth— with its multi-story VIP area with massage chairs, towering lit trusses, beautiful models, touch screen displays, and machines that cut custom guitars to the delight of visitors. “Even the machines look badass”, said one customer. If this doesn’t look like your ordinary CNC manufacturer, it’s because it’s not. The culprit: its CEO and Founder, Chris Corrales.

In his early 20s, Chris owned a nightclub in Orange County, California. Later, he would spend 20 years as a cabinet builder; a departure in industry yet his savvy in creating fun and excitement remains. After spending years learning electronics, mechanics, and becoming ISO-9001 certified, Chris started his first cabinet shop in 1995 building residential and commercial cabinetry. “I like the metamorphosis of remodeling”, says Chris. “I take fulfillment in taking something old and outdated and changing it into something beautiful and efficient.”

As his business took off, the demand for installs required him to automate. He then bought a $140,000 CNC router (a ginormous investment at that time), and was disappointed at how difficult it was to learn and use. “I even had to manually push the pop-up pins to align my material! There were so many things that could be improved and my ideal machine was nowhere to be bought”, says Chris. “So I thought I’d build it myself”.

What happened next was a cycle of the typical design process— Chris would make a CNC for himself. Someone else would then want his machine and he’ll sell it to them. From their feedback he would create a better machine that would solve more problems, then someone else would buy it from him and the innovative iterations repeat. “Today we have 5th Generation CNC”, Chris boasts. “I never worked for a CNC company before, but I’ve been a cabinetmaker for about a quarter of a century. And I think that’s why I just don’t copy what other CNC companies are doing… my machines feel organic, easy to use and instinctive for woodworkers since they were designed by one.”

Chris’s vision for CNC Factory is to make CNC automation as commonplace as a table saw in the modern woodshop. With 5G CNC, its machines have transformed into one that does all the thinking and heavy lifting for its users. “Aside from mechanizing the tiniest tasks like daily homing all the way to the laborious and error-prone task of parts marking, we also made sure that all these are done in a graphical interface that is intuitive and non-intimidating. The goal is doing more with less— less experience, less employees, less mistakes, and reducing manual labor as much as possible. After all, isn’t that the point of automating?” Chris says.

From 2020, Chris has successfully navigated the pandemic with zero employee layoffs and even achieved 100% sales growth. On top of that, he has acquired a second property, expanding their main facility to a 30,000+ square foot showroom and manufacturing hub. Under Chris’s leadership, CNC Factory’s initial offering of CNC Routers has also expanded into dowel insertion machines, edgebanders, thermofoil presses, and robotic arms.

In recognition of his efforts, CNC Factory’s Python XPR has been FDMC Magazine’s Editor’s Pick for Best CNC Product. “We worked very hard to engineer a product that solves a ton of production bottlenecks while having lesser CNC experience, and to be selected as the Top Product by the top woodworking media company is a tremendous honor”, says Chris. CNC Factory has also been a finalist for previous AWFS Visionary Awards and IWF’s Challengers Distinguished Achievement Award. As a CNC subject expert, Chris is frequently asked to speak at woodworking events. This year, he will be presenting at two IWF Educational Conferences in Atlanta.

While all these have been a continued source of pride, the jewel on his crown remains to be the number of returning customers whose businesses have grown phenomenally with CNC Factory machines. Chris also offers financing for starter companies who have excellent products but don’t have enough capital or good credit to purchase their first industrial machinery. “It’s my greatest joy to see small woodshops grow into their first manufacturing building or start to have local brand recognition due to their improved processes from our machines… In a way it’s a reflection of how we have grown so much as a company that’s approaching 10 years.”

Chris is also committed to helping the community: In 2021 he partnered with Houses for Warriors (HFW) in Colorado to help automate the manufacturing of custom cabinetry and wood products for homeless and injured veterans. HFW Founder, Andrew Canales, considers their donated CNC Factory’s machine a “perfect fit” as it is ridiculously easy to use as even their injured veterans on wheelchairs can operate it, plus transient volunteers can be easily trained since no G-code knowledge is needed and it has built-in cabinet libraries with a touch screen control.

We can probably surmise that the CNC Factory brand and machineries simply mirror the man behind it— it’s fun and exciting to be around, practical, profitable, solves a lot of problems, and definitely stands out from the crowd. When you see Chris at the next tradeshow, ask him to rap and he’ll probably do it.

CNC Factory will debut its Cyber Ops Center in the upcoming San Diego Wood Pro Expo in April. Aside from their usual razzle-dazzle, they will feature a hologram of a CNC Factory technician that can operate their 5G CNC machine virtually. This could seem a tad too futuristic and out-of-reach for some companies, but Chris assures that it will be very accessible for small and large companies alike. While the details of this project are still tightly under wraps, what we know for sure is, if Chris is involved, it’s definitely going to be badass.

Sign up for the Freshest CNC News, Offers & Event Invites